Android and iOS have marked themselves as the major platform for mobile application. iOS and Android have particular UI patterns that must be followed. Even slight deviation from these patterns and you are at the risk of confusing your users. The fact which surprises our users is the way we are managing the design and implementation of the two separate platform.

Though each platform have its own unique patterns and quirks, designing layout in Android is challenging as Android can be installed on almost any device. Android devices don’t always have a consistent user experience.

While designing for Android, you need to develop the same functionality as in iOS but to be executed differently.

This can certainly be difficult, considering that apps should look similar on each platform and offer the same functionality, without violating each platform’s native design patterns.

At Configure.IT, while designing Android screens, we make sure that it caters to all the Android resolutions without any hassle to the user. We provide you with the structured layout settings and UI controls which allows you to build the Graphical User Interface of your App.

Though we tried to make the designing curve as easy and simplified as possible, certain assumptions, rules and validations are there which should be kept in mind while designing Android Layout to show it seamless in all the devices with different resolutions.

Android Layout to show it seamless in all the devices with different resolutions.

While creating the Android resources, the following will be assumed:

There are certain Validations to be considering for designing Android Layout:

User has to follow certain rules while designing Android Layout:

When you sync from iOS to Android, you would be required to give layout settings those are exclusively for Android. This will enhance screen design and give you finished & flawless appearance.

Relative Layout displays the relationship of parent-child. The respective child views are placed in relative positions. The position of each view can be specified as relative to the sibling elements (eg: left side of any view or below another view) or relative to the Parent (eg: bottom aligned to any control, left or Center In Parent).

Only Android demands the settings for Layout, supporting maximum resolutions. 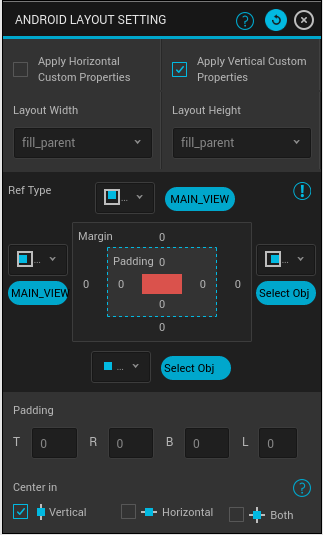 To provide you clear view how Android Layout is designed, we have explained below with an example of Button A and Button B illustrating different screenshots in Configuration Panel and end result / Preview is displayed in Genymotion Simulator. This will help you better understand the logic and use of the properties.

Check the checkbox and enable the custom properties that are applicable horizontally.

wrap_content for Width will stretch and adjust the width of the control with respect to the content present in the control. Default will be Blank.

Check the checkbox and enable the custom properties that are applicable vertically.

Below is the list of Reference Types available for all the directions. On screen, when you select on the dropdown, icon for each Reference Type shows symbolic view of how it will be displayed.

alignParentLeft, alignParentRight, alignParentTop and alignParentBottom – All these will take care of the alignment of Parent. The alignment properties are with respect to the immediate parent of the selected control and not the Main view (normally the default parent). User can make changes by adding the controls in the Object tree. Parent can be set /changed as per the requirement.

alignTop and alignBottom - Alignment can be set as top or bottom.

alignLeft and alignRight - are the properties that require dependent control. The default alignment would be Top-Left. Alignment can be changed as per the requirement.

above or below sets the edge of a control aligned to the dependent control’s top edge or the bottom edge.

Check below screenshots to have exact look how Android Layout Settings window will demonstrate above explanation and how it will be affected. 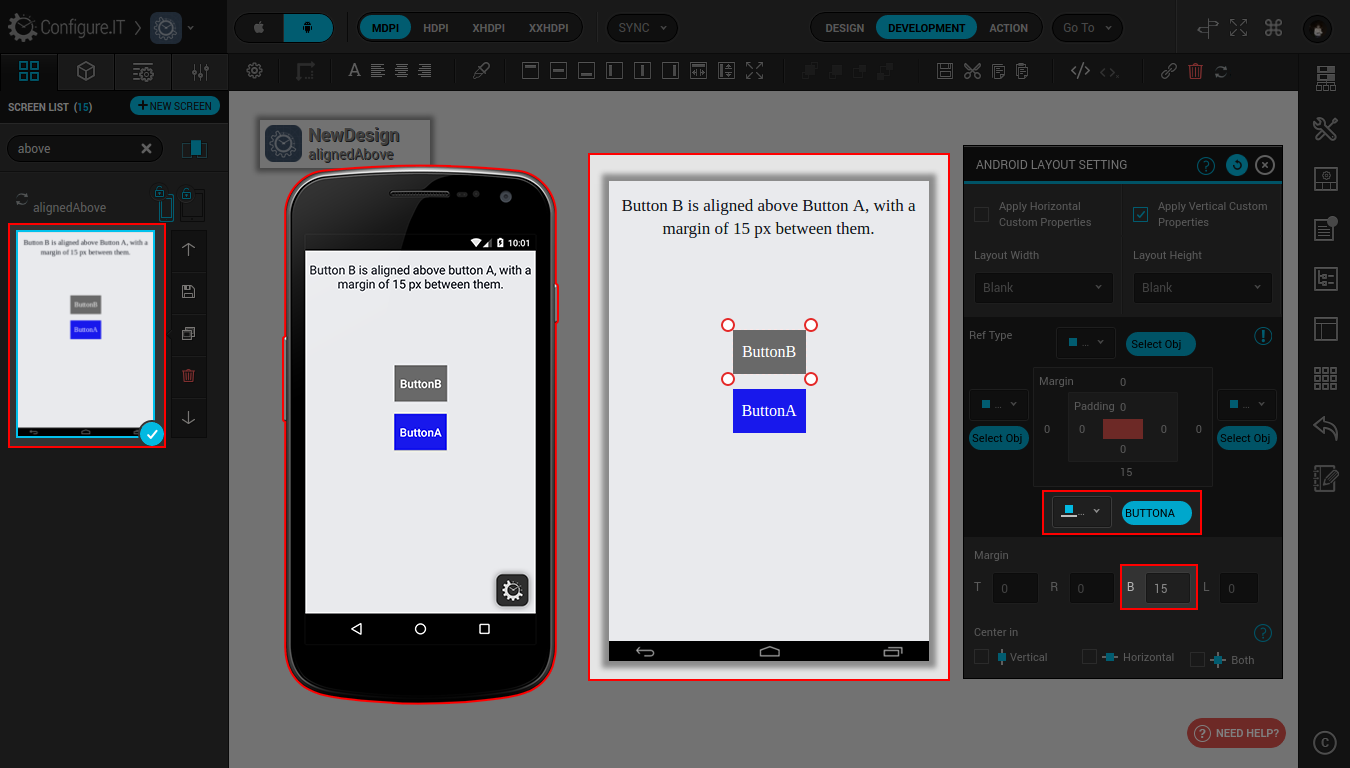 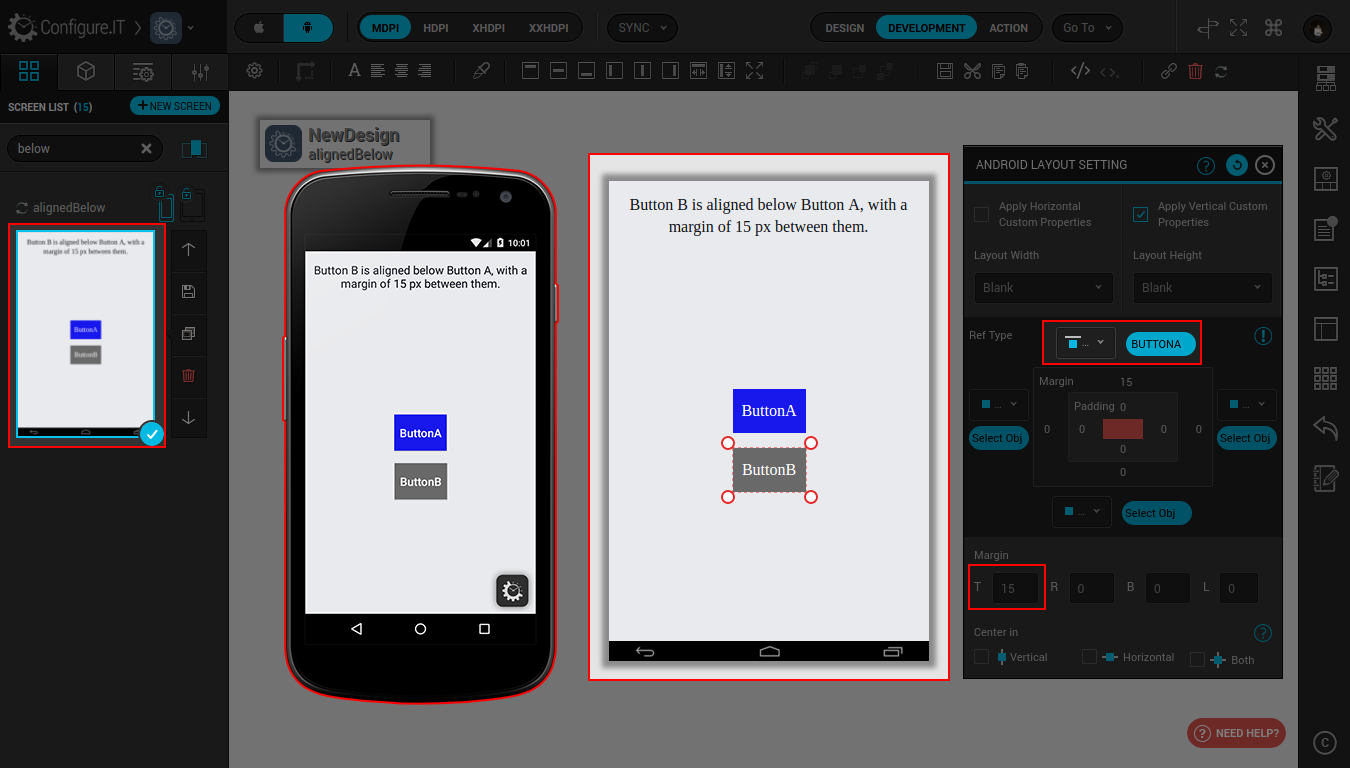 toLeftOf and toRightOf are used when taking dependency. For Eg: button A is toLeftOf button B, which means button A is on the left side of button B. Then, the two buttons will always be in sync and move congruently.

When the spacing to be set is more, than the use of this functionality is recommended so that the same configuration is taken care of, adhering to all the resolutions. 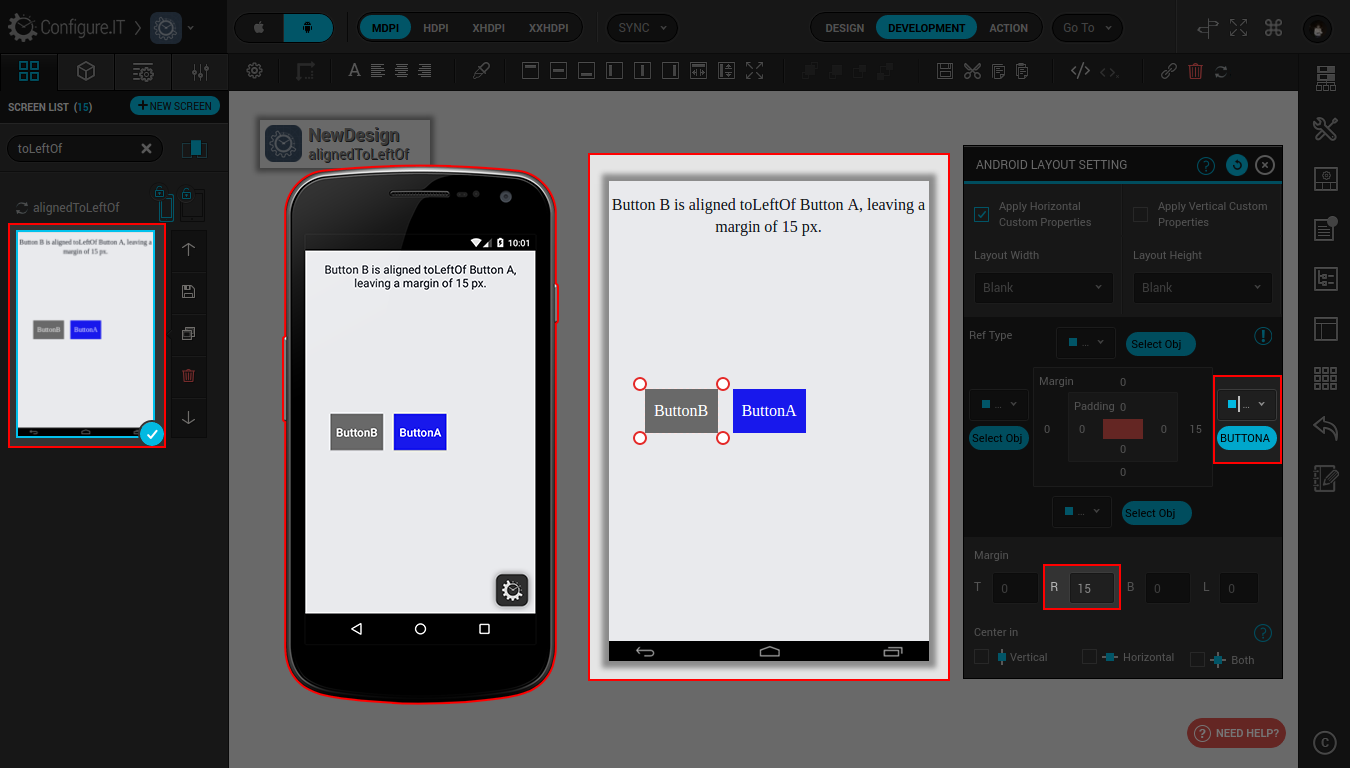 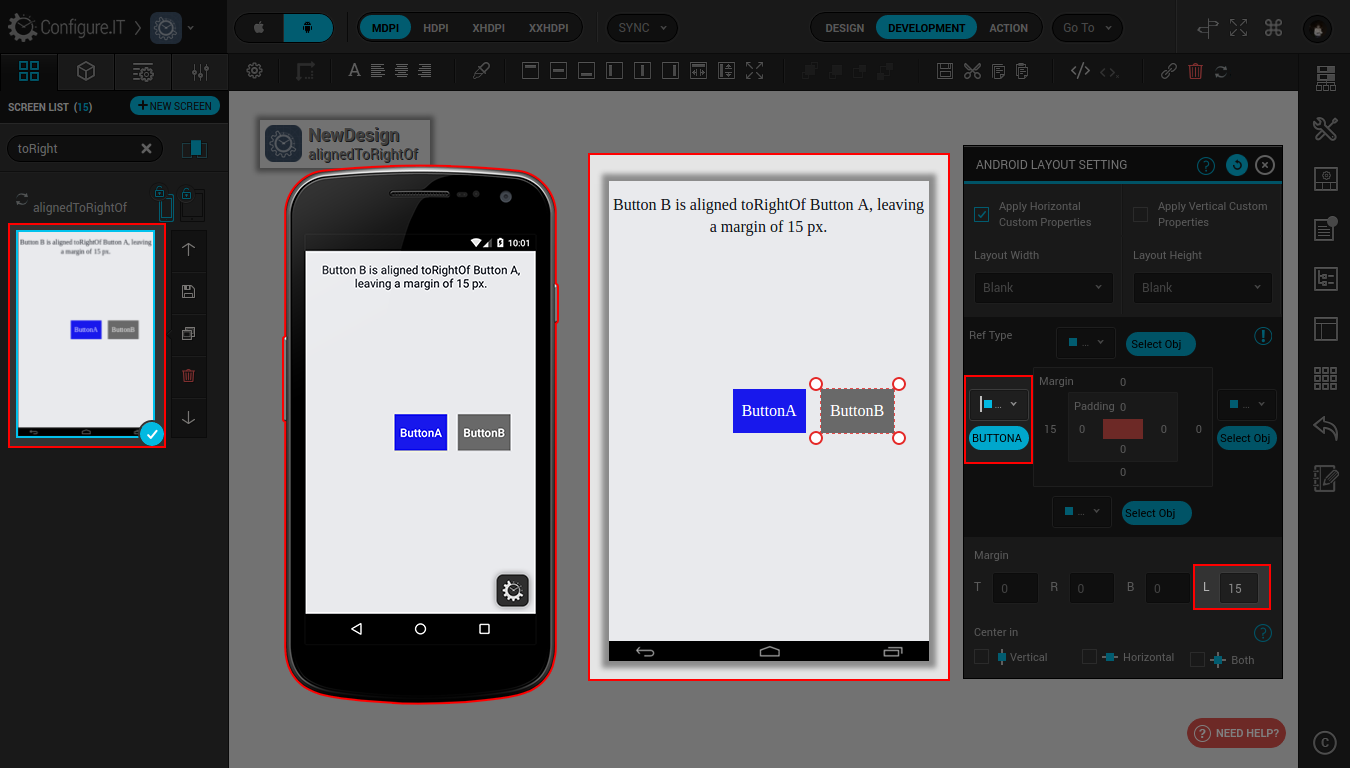 Margin – Set the margin for all the elements: Top, Right, Bottom and Left.

Padding – Correspondingly, this allows you to define and set the padding for all the elements.

Center in – This will position and align the selected control, based on the mode chosen from Vertical, Horizontal or Both.

Migration from iOS to Android

If you want to develop an App for both the platforms – iOS and Android, we strongly recommend user to start with iOS and then migrate the App to Android. Migrating from iOS to Android will automatically take care of the screens, flow & logic from the Configuration panel and create subsequent Android resources for those screens. Only few little changes will be required to make it Android friendly. Please refer to migration guide at Migration Help to follow step-by-step instructions.