In a continuous effort to make Mobile App Development a breeze, Configure.IT today made a revolutionary announcement exclusively for the students. For the most promising career option today as an App Developer, the opportunity Configure.IT has opened up for the to-be-developers is going to open widespread possibilities for newbies to experiement, learn and adopt the entire mobile ecosystem specially with the development. “We met with a bunch of universities and colleges to see how they teach app development, to see how if Configure.IT fits into the learning process. We could clearly distinguish the way they were learning versus what’s required to become a pro. The approach is completely different. And that’s what we want to help with – by making the platform accessible to students without any hurdles and any fee” – says co-founder Mr. Ram Chhawchharia.

The completely drag-and-drop and configuration-based platform can hugely accelerate the grasping of entire development lifecycle for an app to be created without deep learning of multiple technologies. By making the platform entirely FREE forever for the students to come and start scratching upon their ideas, is one way to accelerate this process. They don’t need to learn all the complex stuff, but dive into the platform that doesn’t require them to code upfront.

To get special student access to the platform – student just need to sign up and send a special request with their student ID card to enable the free access.

“We’re also open to tie up with universities and colleges for a special group access to the students for the innovative way to accelerate the app development education and make it easy” says Jigar Panchal, Director of Marketing.

Configure.IT announces today flurry of upgrades to the platform, that are scheduled to be launched within Q1 2016. This is the biggest upgrade in a quarter since the launch of the platform back in September 2014. While the platform has seen a plethora of enhancements, new features and upgrades – this is by the far the most extensive and major announcement in recent time.

The platform also promises to upgrade their mobile apps offering, by making two most forward looking announcements for both iOS and Android Platforms. On top of option of downloading Objective-C code for iOS, the platform will support an option for downloading entire source code in Swift 2.0 – which is heavily promoted by Apple®.

For Android, the apps will be now fully compatible with Marshmallow (Android® 6.0) which is the version used by many new Android Phones.

Configure.IT is also excited share that we have been shortlisted for participating as SURGE 2016 ALPHA Startup and will also be a part of the PITCH event, to be held on 23rd and 24th February 2016 in Bengaluru, India. PITCH is the startup competition at SURGE that brings together the world’s leading early-stage startups for a live onstage battle. PITCH features 40 of top exhibiting startups.

“We have got great plans lined up for 2016 for making app development process easier, and most importantly, ensure we enable new ideas for startups and enterprises to be implemented by reducing dependency of technology and skills” – says Co-founder Mr. Ram Chhawchharia, who is highly optimistic about nurturing startups. On behalf of the entire team, we wish you a Very Happy Holidays in advance!

We’re all geared up for some ice breaking updates in 2016. Stay tuned…

As we approach Christmas, a big Configure.IT gift is ready for the developers. Configure.IT offers a massive discount of 50% for all the new subscriptions for the next one year. This offer is valid till 15th January, 2016.

To get the benefit of this offer, Sign Up with the following Coupon Code : YEAREND50 to avail the offer. If you subscribe in Monthly Scheme, then for whole one year you can renew with the same discounted price. Configure.IT has recently celebrated the first anniversary of its launching. On this special occasion & by getting a grand success in the first year, we announce the Special Anniversary Discount, flat 50% off on subscription fees for the entire next year.

If you are a first-time user and want to test all the aspects of Configure.IT, you are free to use them without paying any amount. Furthermore, to develop an app in collaboration with others to speed up the project, users can choose the ‘Team’ package. The other plan, highly recommended by the team of Configure IT, is ‘Personal’ package for a single user.

Let’s know more about these plans:

Configure.IT is a revolutionary cloud-based platform to build a native mobile app for Android as well as iOS without writing a single line of code. This platform gives a complete set of tools to develop an app from scratch to finish, just by drag-and drop. Additionally, this platform gives a flexibility to re-use its every aspects right from display control, app screens to entire app itself.

Moreover, Configure.IT proved itself as one of the best cross-platform app development tool in the app community by winning the Aegis Graham Bell award for Mobile app development and delivery for the year 2013.

If users have any query, they can find the solution at Support center or ask questions directly from the Contact Us section or live chat option is also available to solve the query instantly. Configure.IT, a platform for developing customized mobile applications, offers mobile app development from scratch. Features like minimal coding, preview facility, and rich libraries give it a distinct identity among peers.

Configure.IT is going to launch the Android support after keeping it in beta form for more than a year. On asking about this, the founder of Configure.IT said: “We wanted to make sure that we come forward with the same quality product for Android platform. For this reason, we gave this (Android) version enough time in the hands of other developers prior to officially launch it.“

In answer to the question regarding features, the co-founder told: “Features will be the same as those for the iOS platform. Enough care has been taken in keeping both features and functionality the same in both the versions.” “It is going to be a handy platform for both Android and iOS developers.” He concluded.

Features including 35+ native controls for developing native apps, integrated image editor, reusability, multilingual support, and preview are the same in both versions. All existing and new users and developers will get Android support from July 15, 2015 onward on Configure.IT without paying any additional charges. Now onward, users can either develop an app for both the platforms or after developing an app for one platform, they can simply import it on another platform.

Configure.IT releases the full version of its app building platform on the September 26th, 2014. Named after the company itself, the mobile app development platform was built to aid developers or any other competent individual in speedy app creation. Configure.IT hopes to revolutionize the app development by enabling users to create standardized yet customized apps in half the usual development time. The platform features an interactive interface that enables users to configure the decisive aspects of app development. It begins by building a database and then continues, to configuring a data management console (popularly known as “admin panel” or “cms”), building the relevant APIs (web services), building the Mobile APP and the necessary testing to make the app a success. “There are plenty of BaaS and PaaS providers in the market, but they don’t offer configuration and automatization to this extend. Another import aspect that sets us apart is that we offer 0% lock-in for the source codes,” says the Marketing Head at Configure.IT “Developers/ users are given the entire rights to the source code of the applications that they develop through Configure.It.”

Configure.IT bagged the Aegis Graham Bell award for Mobile app development and delivery for the year 2013. As a complete package to businesses in search of Baas and Paas services, the platform helps users ace through the whole process. Built on the concept of reusability, the platform opens up a whole level of possibilities for business owners and IT companies. Every aspect of the platform, right from modules to API and even entire app can be re-used, dramatically reducing the time and effort spent on app creation. “This enables businesses to restructure workflow and free – up resources to concentrate on their core-business goals.”

Most solutions available in the market today, provide only part of the entire app development. Some specialize in Backend services, others provide API layers and yet another category enables configuration on the app front. Configure.IT on the other hand brings together everything that you require to develop an app, under one roof. Being entirely browser-driven, it allows its users to work at anytime and from anywhere. The degree of flexibility and independence that the platform offers is one of its core competencies. As it focuses more on configurations and less on coding ,Configure.IT provides fully configurable app setting and a whole slew of library features. A direct user interface that binds with the API lets users perform iterations extensively. The platforms lets users reuse almost anything right from display controls, app screens to entire applications itself.

Another feature that makes the platform all the more versatile is the live app testing facility through an app previewer tool. This facet of the platform enables developers to test the app real time, significantly improving UAT as most codes are machine generated. Equipped with all the features and functions to make developing apps a more simple and easy process, Configure.IT is expected to make huge waves in the IT industry. We hope to create a platform that enables developers or users to be able to develop applications that are completely standardized, completely customizable and adhere to the best practices norms. 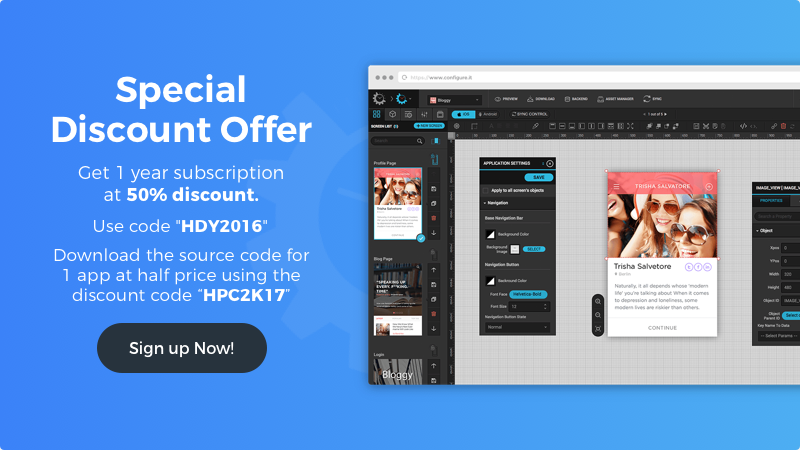